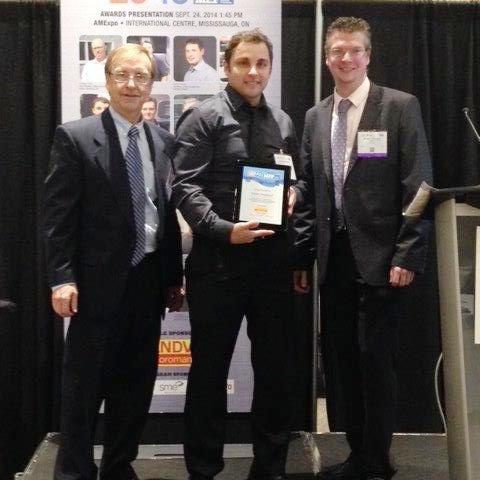 Robby Shepherd started at Advanced Machining Services in 2002 sweeping the shop floor. He had zero shop experience, but his employers knew he had a good work ethic. He quickly learned how to operate an old band saw, then graduated to the company’s Bridgeport machines. He quickly excelled at general machining and completed the Machining Apprenticeship program at St. Clair College, graduating in the top of his class. “Using his exceptional machining skills, Robby quickly mastered our older CNC VTM Mazak mills,” says AMS co-owner Normand Marcoux. “He soon became expert at programming/operating all our CNC mills and lathes. Through a business merger, we inherited a newer Mazak Integrix 300IV Mill/Turn center.

After a failed attempt by a couple of experienced machinists we hired who ‘knew’ how to operate this machine, it became apparent that this machine was beyond our capabilities, so we tried selling it. During this time, on his own initiative, Robby took the manuals home to learn the basic programming of this machine. After mastering the basics, we enrolled Robby in some Mazatrol programming.

After a few courses, he was the ‘go-to guy’ on the shop floor and has since trained others on this machine and other CNCs.” Over the past three years, Advanced Machining Services implemented high pressure coolant in most of its CNCs and replaced four old mills with two new, high speed Mazak mills, along with yet another Mazak Integrex.

“Robby was instrumental in specifying which machines to purchase and integrating the second mill-turn machine into the mix,” says AMS co-owner Darryl Dufresne. “Robby has attended a number of training courses and is self-taught in a number of other areas. Trainers often comment on his natural abilities and knowledge, as well as his eagerness to learn and teach others. Robby really enjoys machining and is truly committed to this industry, so much so, that two years ago, when he was diagnosed with advanced stage of nonHodgkin’s Lymphoma, he insisted on working through his treatments. This was a very scary time for Robby and his new bride, but through his chemo and radiation treatments, he kept a brave face, continuing to work when his body would let him. He inspired us all! I would be hard pressed to think where AMS would be without this bright, energetic young man on our team! Space is limited, but I could go on extolling his virtues and value to the success of AMS.”